My dad (Paul Pace) has been actively involved in the cedar shake industry since the 1960's. Due to his skills and hard work ethic, he became in high demand and was installing cedar shakes on some of the finest homes in Hamilton, Boone, and Marion counties. Back in the 1970's, he introduced me to the industry and I began helping him on weekends and during summers until I got out of school. At that time, I decided to pursue a career in the cedar shake industry. As time went on, I took an extreme interest in the field. I began to build on what my dad had taught me and once again, due to skills and a good old hard work ethic, I too became in demand.

As a second generation master shaker, I established A-1 Cedar Shake in 1985 to help better serve and educate consumers in the industry of cedar shake and shingles, and to make a living doing what I love. My work has taken me many places: from Indiana to Illinois, Michigan, and even California. 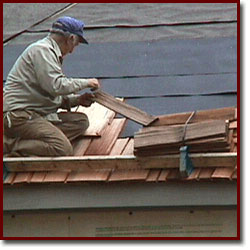